HOW TO HIRE A BLOCKCHAIN DEVELOPER? 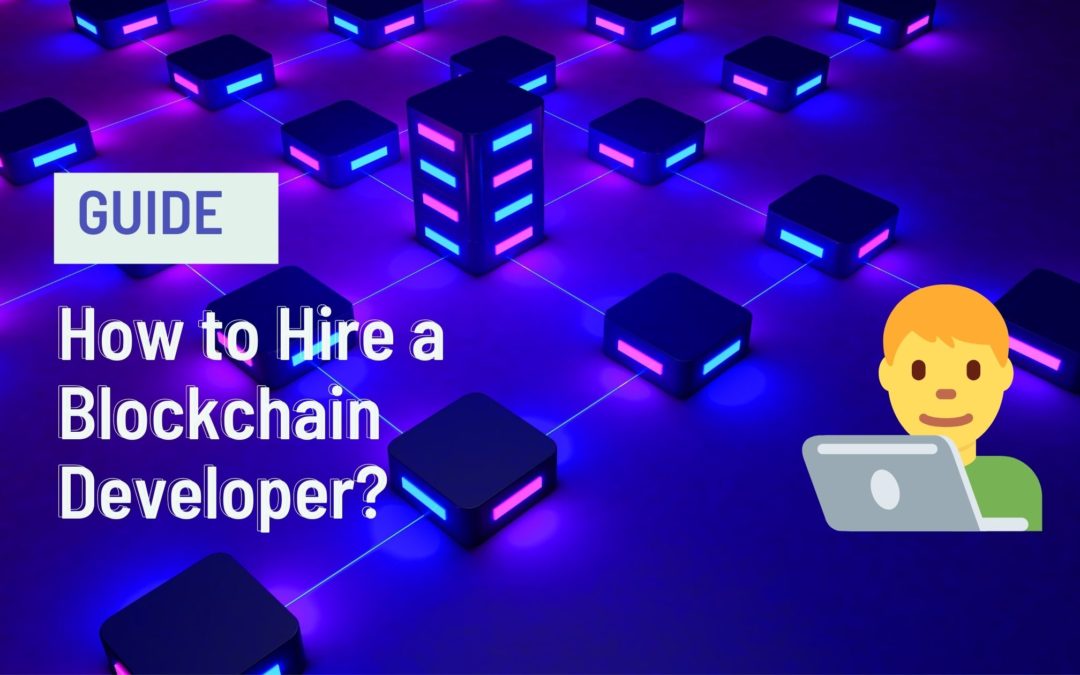 A guide on what to look for when hiring a blockchain developer.

There is growing global interest in the field of Blockchain Technology. It is a next-generation disruptive force armed with decentralization. You can store information on the immutable and distributed ledger of the blockchain. All of the data is accessible from multiple points known as nodes. The users can verify the data and carry on the operations transparently. This unique nature of Blockchain technology makes it extremely useful for businesses. As a result, many corporations are looking to hire blockchain developers.

The number of blockchain jobs has risen by 631% since 2015. The market has reached $23.3 Billion. So far, blockchain technology has been put to use mostly in the financial sector. The secure and transparent nature of blockchain makes it an excellent tool for recording financial transactions. Nevertheless, other industries such as e-commerce, retail, and real estate are also trying to incorporate blockchain in their day-to-day operations. Hence, employers are curious to know the qualities of the best blockchain developers who can join their in-house teams.

Benefits of Developing a Blockchain:

Blockchain developers are an excellent addition to your team. They can build dApps to optimize service delivery. In addition, they can create new blockchain platforms and expand your business. Here are some key benefits that you will get after hiring a blockchain developer.

Blockchain is distributed across the network of computers. It is nearly impossible for anyone to hack into all these computers at the same time and change information. Therefore, blockchains are immutable.

Blockchains are much safer than clouds. There is no threat of security breach of any kind. Hence, financial providers are leaning towards using blockchain for transaction records.

Interesting for You: What is Metaverse? Meaning and Examples

You can streamline the operations in your company by identifying terms and conditions in decentralized Apps. It will make stakeholders aware of the process and improve efficiency.

You don’t need to trust the other party when you are doing business using blockchain. There is a common saying in the blockchain world, ‘don’t trust, verify. You can verify all the information and thus save money on hiring lawyers and writing contracts.

Blockchain has revolutionized the financial world. Now companies can launch their own tokens and do business with them. You can give utility to your token and also take advantage of its price surge.

The Required Skill-set of Blockchain Developers

Here are some of the basic skill sets you should look for in an ideal blockchain developer.

Programming is an important skill for anyone working in the field of computers. For the Blockchain developer, knowing the basics of programming becomes even more crucial. The blockchain industry is constantly evolving, a developer needs to be aware of new changes and updates. Therefore, understanding syntax and the ability to write codes will build a solid foundation for building apps.

Blockchain is a distributed ledger spread over the internet. This requires the knowledge of developing peer-to-peer networks, data transfer, routing, etc. Hence, a blockchain developer must have the skill of developing secure networks.

The developer has to secure blockchain using cryptography. Moreover, he has to encrypt all the data for protection. Therefore, knowledge of advanced-level encryption methodologies is essential for good blockchain developers.

The elements in the link lists have two items i.e data and reference to the next node.

It implements the associative data array that maps the key to the value. This data structure is ideal for the fast retrieval of information.

An acyclic is a data structure without cycles. It is also known as bipartite. You can use this to solve real-world life problems.

Decentralized applications or dApps are an integral part of the blockchain development process. dApps were first introduced by the Ethereum network. They are executed by nodes.

Smart Contract is a digital equivalent of terms and conditions manual. It is a piece of code that executes when certain conditions are met.

Blockchains are open to all and allow equal participation to all stakeholders. Voting rights are distributed to participants via a consensus mechanism known as Proof-of-Stake (PoS) or Proof-of-Work (PoW).

The ledgers are distributed over the internet. All the computers on the network have access to these ledgers.

Permissionless blockchains are completely open and transparent. Anyone can read and verify them. There is no central body or authority controlling it.

Sharding is the process of dividing a network into smaller shards with interconnected nodes. A subset of nodes processes the transactions and then releases them to all nodes in the shard.

Sharding improves the performance and scalability of the blockchain network.

The token is an important part of the blockchain industry. They represent a digital asset as well as a governance right. Token holders can vote on improvement proposals and also sell their tokens for profit.

A blockchain developer has to build a mechanism for token minting, rewards, and burning.

Where to Find the Best Blockchain Developers?

You can find the best blockchain developers through Job boards. Post your requirements on the job search sites and scrutinize the candidates via interviews. You can also find a well-suited person by searching the developers of existing blockchain projects. A developer with proven experience in the industry will help you get on with things instantly.

Vizz Web Solutions also provides blockchain development services to its clients. We designed, developed, and deployed nSights platform in the defi (decentralized finance) space. It is a game-changing platform with its own tokens.

If you want to leverage the services of our blockchain developers, come in contact for discussion.